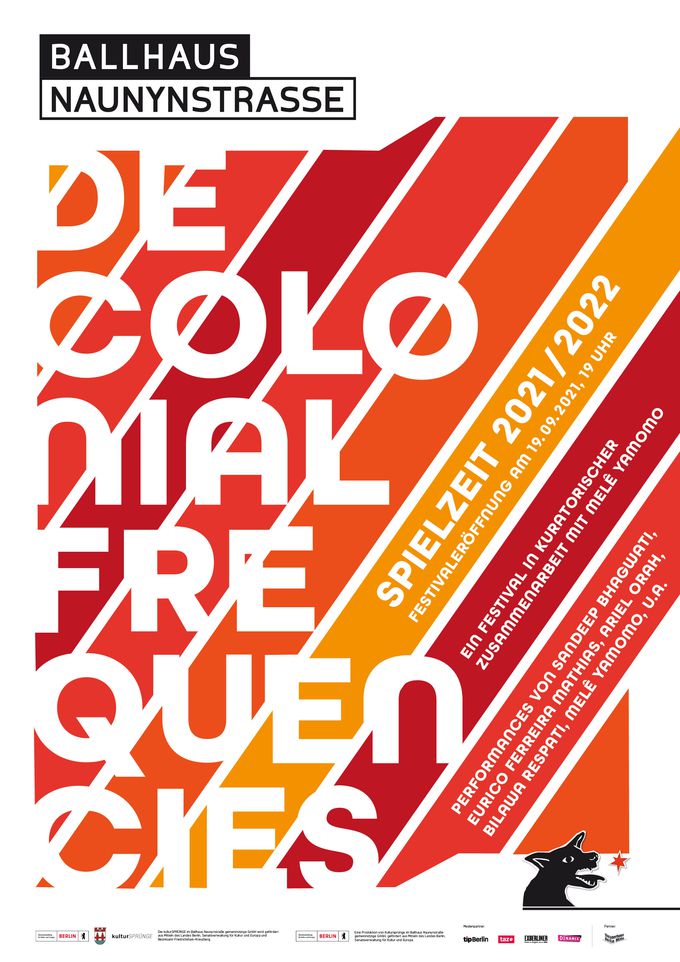 On 19 September 2021, the »Decolonial Frequencies« Festival, curated by meLê yamomo, will open at the Theater Ballhaus Naunynstrasse.

Familiar sounds and terrifying noises. The fleeting fragments of remembered melodies, favorite songs, the noise in our home street. We live in our sound world, it gives us orientation, feeling, and energy. Subjective, intimate – and yet the acoustic perception is the result of history, of the colonial formation. What we understand as “music”, as “beautiful”, “harmonious”, “contemporary”, as “literary”, “relevant” or “true” is formed by a history of appreciation and depreciation of sounds, practices, and bodies. Our hearing, understanding, and sound creation were shaped in long frequencies, but stubbornness creates friction, waves of resistance, and echoes of solidarity. Can these clashing interferences register or yield sonic confrontations? Can changes in hearing, understanding, and appreciation be shaped?

»Decolonial Frequencies« is a series of events over the entire 2021/22 theatre season. More than 20 artists, black perspectives, queer approaches, Asian-diasporic occupations, post-migrant traditions, and voices of color, create numerous performances, lectures, and concerts in their constructed acoustic spaces – with critical amplitude, in gyrating oscillation, and in uncontrollable interference.

Sandeep Bhagwati‘s The Sound Of Misunderstanding – Dhvanivala‘s Sonic Explorations will kick off the series that will run throughout the theatre season 2021-2022.

The autumn edition of Decolonial Frequencies will feature Ariel William Orah and Bilawa Respati‘s Gaung – Unvorherbestimmte Resonanz and a piece I am creating with Eurico Ferreira Mathias entitled, “Overtones”. Check our website for the season lineup: https://ballhausnaunynstrasse.de/events/

Join us in listening! 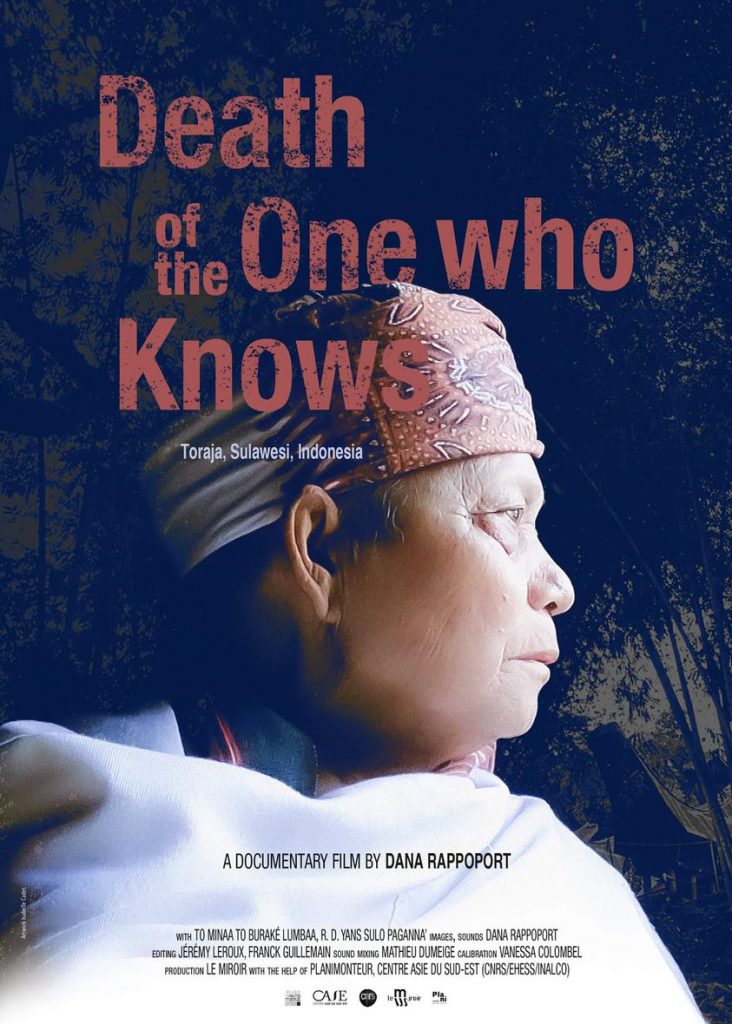 Preview screening, in the presence of the director and followed by a debate moderated by André Iteanu, anthropologist (CNRS, EPHE) organized by the Société des Océanistes as part of the Océanistes cinema cycle, in collaboration with the International Festival of the Oceanian Documentary Film.

In the Toraja Mountains of the island of Sulawesi, Indonesia, Lumbaa is one of the last masters of ritual speech. Forced to convert to Pentecostalism, he was obliged to interrupt his oratory and ceremonial activity. Faced with the disappearance of “those who know”, a young priest, named Yans Sulo, sets off in search of ancient orality to reinvent in his own way a form of remanence. The two men meet. But it’s too late.
By telling the story of Lumbaa’s life and death, this film tells the story of a society turned upside down by the intrusion of a religion with a universalist aim. 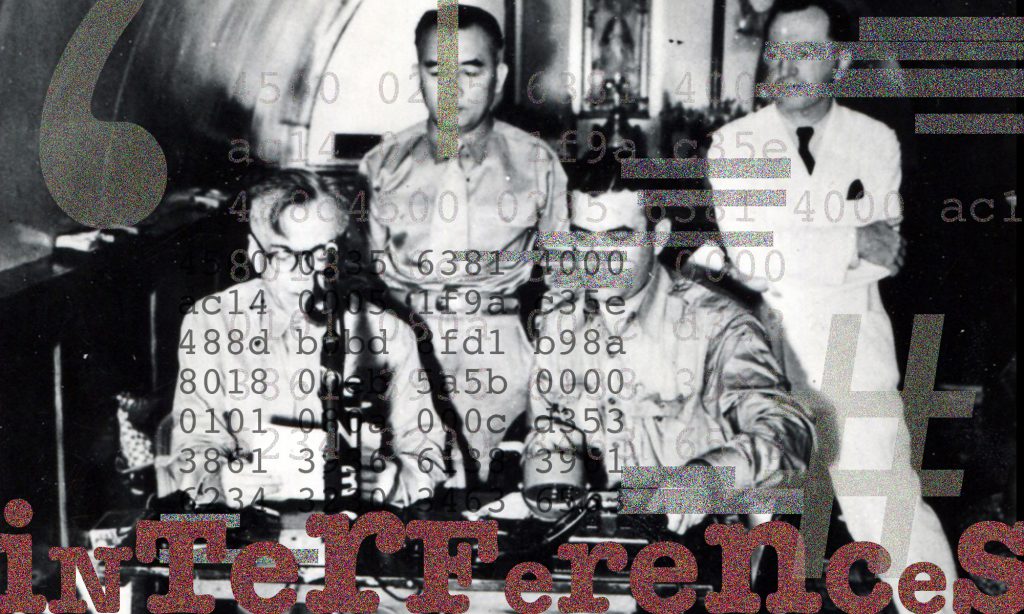 DeCoSEAS project leader, meLê yamomo’s »Interferenzen: Koloniales Scheitern im Radio«, premiered on Deutschlandfunk Kultur Radio Art last December. After almost a year of repeated postponements due to the corona pandemic, the performance is now scheduled to be staged as part of the 100 years radio exhibition at the museum and of the Berlin Arts Week.  You can see the announcement of the event here: https://www.mfk-berlin.de/interferences and more information below.

The live version will have updated scenes and will be “aired” in English. Thijs van den Geest will join meLê yamomo to perform live electronic music and trumpet. More information on the website: https://www.mfk-berlin.de/interferences/

This sound-performance piece listens to the interferences of radio history and colonialism. By sampling recordings of historical radio broadcasts from Germany, the Netherlands, Great Britain, and Asia, and composing them, audio interviews, electronic music as well as a live performance by trumpeter Thijs van den Geest, meLê yamomo ensounds the repetitive loop of colonialism’s failures into “Interferences: Live”.

With the help of historical radio recordings from Germany, the Netherlands, Great Britain, and Asia, the artist meLê yamomo examines how the last century of listening to the radio has adjusted our hearing to certain aesthetic and affective listening habits.

By removing technical, cultural, and psychological disturbances, we try to ensure an “unimpeded” – interference-free – transmission. Less noise through better technology – and at the same time drowning out the indigenous population through programming according to Western European standards? Is that the colonization of hearing?

The work is based on the radio play Interferenzen, which was commissioned by Deutschlandfunk Kultur as part of the focus “100 Years of Radio” 2020.

The performance is free, but there are limited slots because of the corona regulations so please book your tickets ahead here: https://eveeno.com/268592016 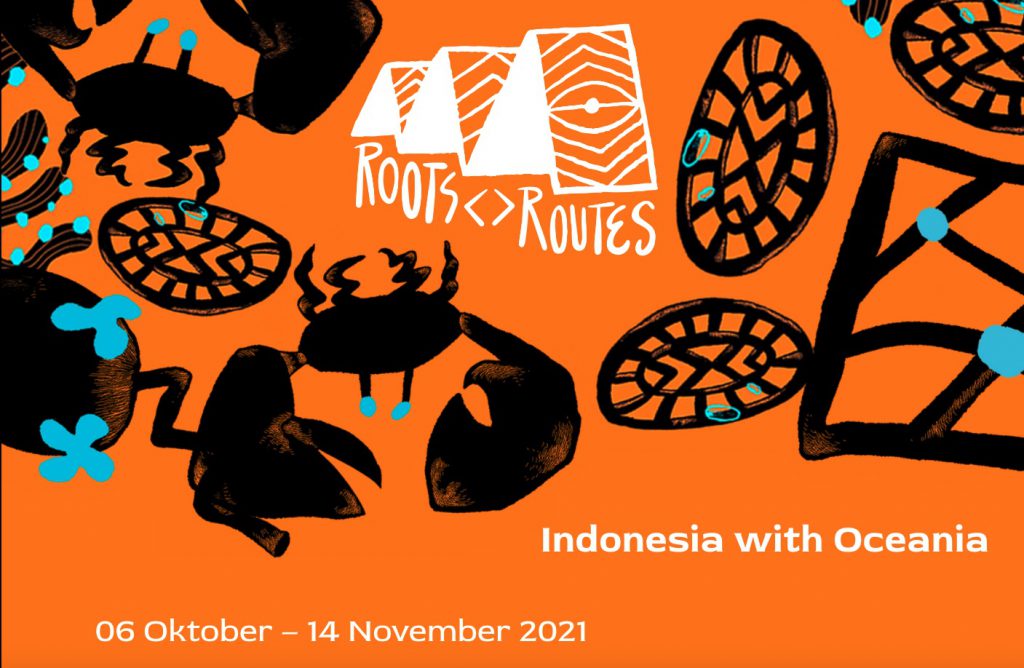 meLê yamomo will be joining the Sesi Viral Biennale Jogja focusing on Decolonization and Art Practice/Politics as a responder. The session includes Pak Daud Tanudirjo presenting his collaborative exhibition of women, Art and technology in the Pacific, and Cosmin Costinas about his collaborative exhibition The Ancestor during Europalia Art Festival. The panel is curated by Alia Swastika and Mashur Zikri.

“The discussion topic aims to frame multiple perspectives to obtain a better understanding of activities that research the interplay between contemporary cultures growing in the Archipelago and Pacific Islands. The conversation emphasized the connections between contemporary culture and local culture. This explanation is supposed to offer a critical assessment of the state system, non-governmental social and cultural institutions’ strategies, and society’s response to this cultural encounter: especially the way in which power relations have transformed historically over time.”

You can festival the biennale website ( biennalejogja.org/2021/program-publik/) for registration and further information! 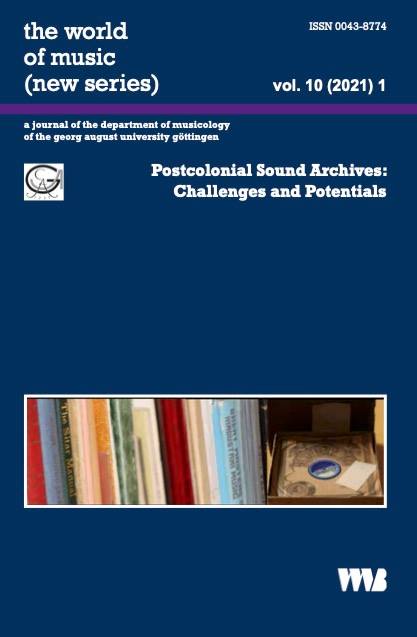 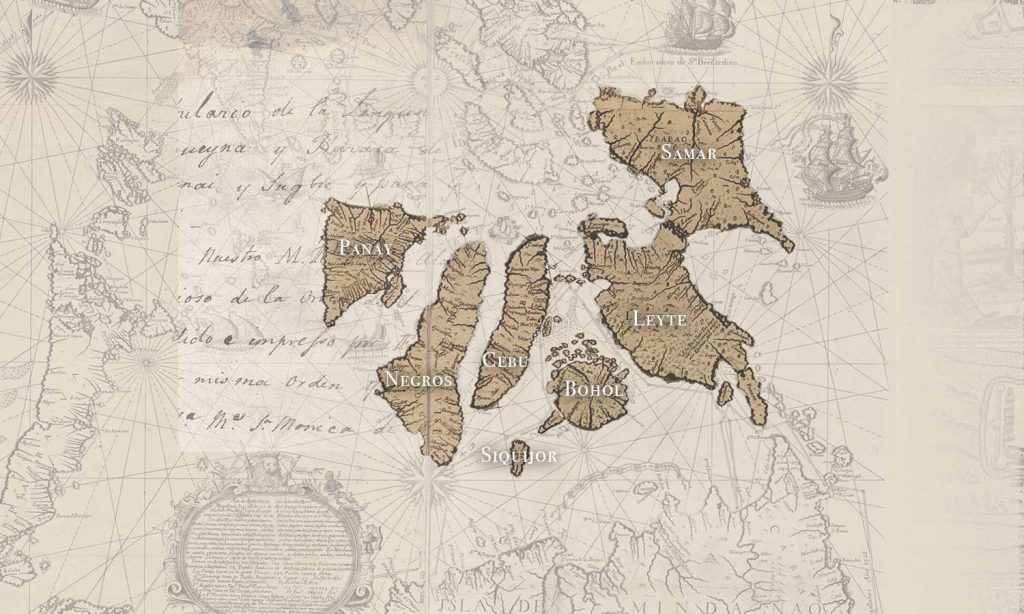 Following the 2021 Annual Philippine Studies Conference at SOAS, University of London, PI Cristina Juan curated the virtual exhibit Kaagi: Tracing Visayan Identities Through Cultural Texts. The exhibit explores the ways in which texts, objects and performances negotiate, mediate and translate the ‘Bisaya’ as a collective identifier of culture, language and artistic practice.

Drawing on archival sources on the Visayas, dating up to the 17th century, most specially the Arte de la lengua bisaya hiliguayna de la Isla de Panay (circa 1628) now kept at the SOAS Special Collections and Archives, the exhibit explores the connections between colonial archives and cultural practices from the Visayan region. The exhibit’s interactive portal features ten categories of early contact cultural heritage and extends the exploration by accompanying these with works by contemporary Filipino artists who adapt, transform, and subvert these representations in their practices.

THE #sonicentanglements PODCAST IS UP!

We warmly welcome Pierre Prouteau in ours midst. Pierre will work for DeCoSEAS as a postdoctoral researcher on the digitization of PI Dana Rappoport’s Thrice Blooded Land multimedia corpus, and on the constitution of a critical repertoire of colonial French sound archives. Pierre will also help foster and extend dialogues between DeCoSEAS partners in various capacities. More information about Pierre can be found here. 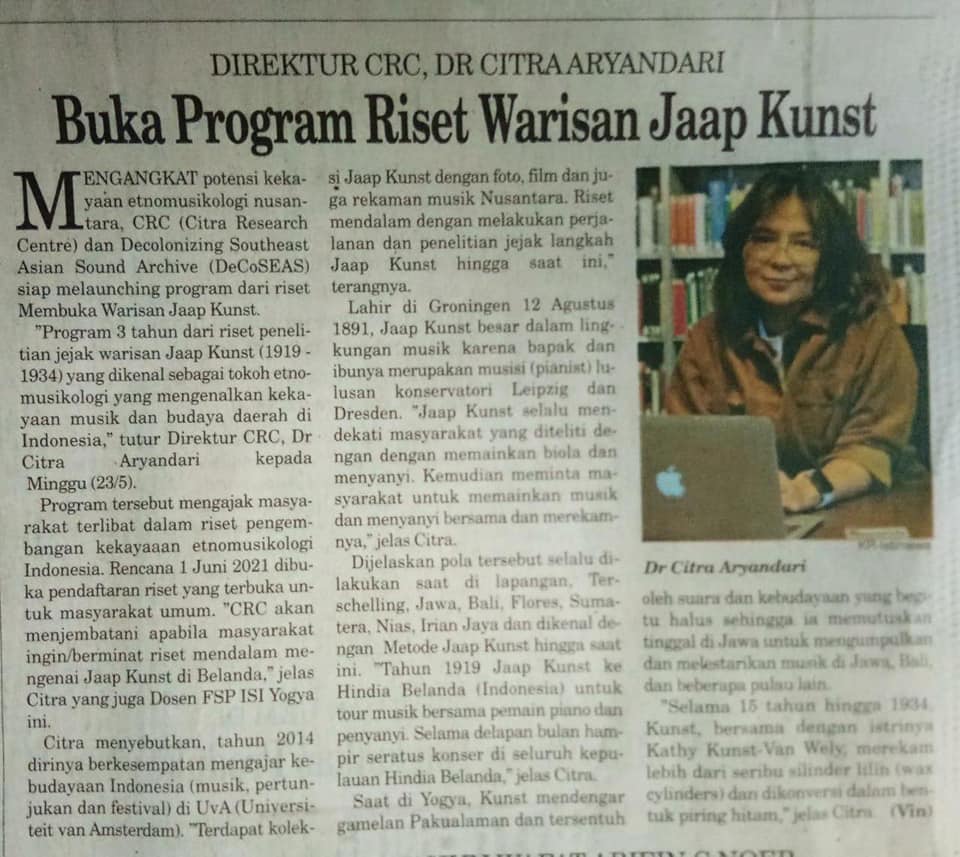 On 24 May, DeCoSEAS partner dr. Citra Aryandari was interviewed for the Indonesian newspaper Kedaulatan Rakyat about the collaboration of Citra Research Center (CRC) with DeCoSEAS. CRC has already proposed tangible plans for the exposure to Indonesian communities of the sonic legacy of Jaap Kunst that is now located at the University of Amsterdam in the Netherlands. Outreach projects in collaboration with local (music) schools and communities are currently being prepared.